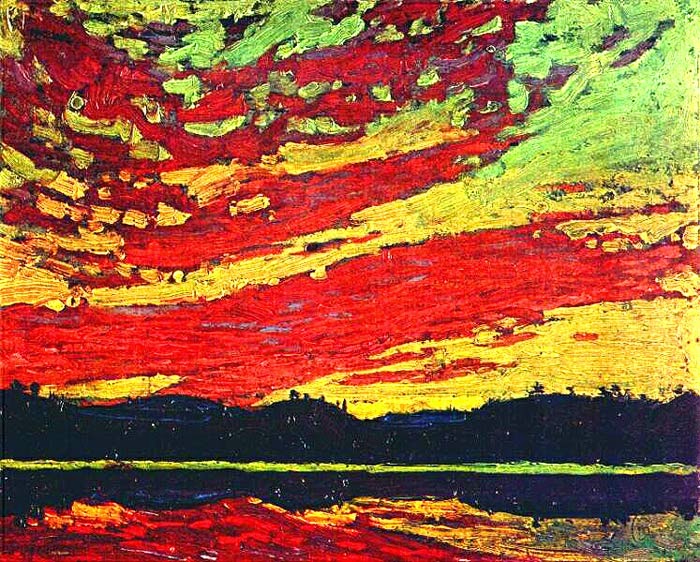 Tom Thomson (1877-1917) was an influential Canadian artist.  Largely self-taught, Thomson worked as a graphic designer at an artistic design firm in Toronto.  Although he had been painting and drawing since childhood, it wasn't until 1912, at age thirty-five, that Thomson began to take his art seriously.  It was then that he first visited Algonquin Park in Ontario, and he was inspired to paint the spectacular scenery he saw there.  Thomson worked as a fire ranger in Algonquin Park during World War I (having been denied entry into the military) and during this time he produced hundreds of sketches and paintings of the landscape.  Sadly, Thomson drowned at 39 in Canoe Lake, Algonquin Park.  Since his death, Tom Thomson has become a painter of great influence and stature in Canada, and his death has continued to fascinate people, often claiming there was something more sinister to the story.  In my eyes, this particular painting is just magnificent.  The ecstasy conveyed by the vibrant colors almost pulses with intensity and the shapes created in the sky are quite arresting.  I love Thomson's loose brushwork which gives the piece a sense of immediacy and presence.  The artists love of the landscape can be clearly felt.