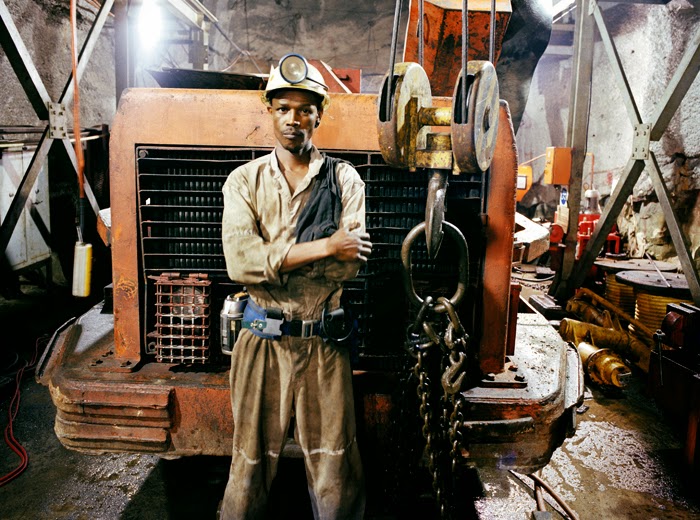 Zwelethu Mthethwa (b.1960) is one of South Africa's most celebrated photographers.  Mthethwa described South Africa as "a nation in transition," and many of his photographs show that.  He takes his subjects from many walks of life, from landscapes to domestic scenes.  Here we see a miner in his workplace.  The first thing that strikes me about this photograph is how vivid and colorful it is.  We can see the beige of the miner’s coveralls, as well as the variegated dirt scattered on them, the blue and green of his belt, and the yellow of his helmet, as well as the bright orange of the machinery.  This is also a very large photograph (55"x70") so the impact in person would be quite powerful.  The miner stands front and center in the picture space in a commanding pose, with a large machine behind him and a large hook next to him, thoroughly in charge of his surroundings, even guarding them; the background is filled with various equipment as the room recedes behind him.  While Mthethwa’s miner is alone in the picture, these elements signal his situation and conditions and we can grasp the arena he is a part of.
Posted by David B at 9:46 PM No comments:

Dürer, Knight, Death, and the Devil

I love Dürer.  He was one of the artists who made me want to study art history.  Often considered the greatest printmaker of all time, Albrecht Dürer (1471-1528) has a vast oeuvre of both paintings and prints.  Most of his prints are extremely intricate scenes, containing an astonishing amount of detail and depth (both spatial and thematic).  This engraving is no exception.  In this image, a knight rides impassively through this valley (accompanied by his faithful dog), although Death rides beside him, on his obligatory pale horse, and the goat-headed Devil follows behind.  The complex background is rendered in typical Northern style, with rocky outcroppings and a distant town, and the Devil and Death follow this style.  This work, frequently cited as one of Dürer's masterpieces, is often seen as an allegory of bravery and piety (the knight being cloaked in the armor of his faith), however I am not convinced the theme is so straightforward.  If we look closely at the Knight's face, we see it is actually quite lined–perhaps the companionship of Death has taken its toll.  Indeed in some ways, particularly in the upper lip, the Knight's face resembles Death's.  Furthermore, the Knight's horse, although rendered strong and muscular, actually appears quite tired, its heavy breathing evidenced by its open mouth.  Death meanwhile gazes at the Knight, almost adoringly, and holds up an hourglass to show him that his time is running out.  The Devil's role in the scene is more complicated.  What place does he have following a supposedly valiant knight?  To lead him astray?   Then surely he should be in front of the knight, waiting to impede him.  Indeed the Devil is not even looking at the knight.  Instead he is gazing out at the viewer, bringing us into the scene.  The Devil reminds us of our fate, to fall into Death's cold grip.  If even this gallant knight cannot escape the pale rider, how can we? 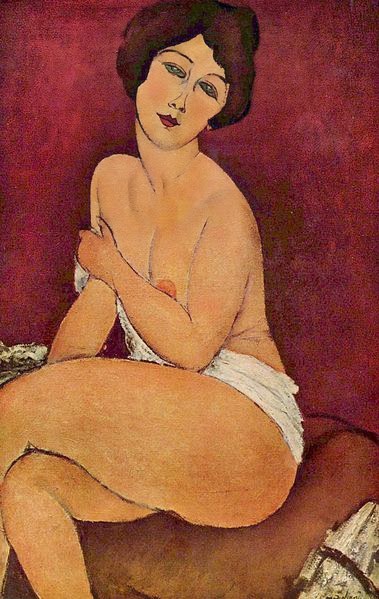 Modigliani, Nude Sitting on a Divan, 1917

Amedeo Modigliani (1884-1920) was an Italian painter best known for his elongated portraits of women.  This piece exhibits some of those characteristics, certainly her neck is elongated and the proportions are not realistic, but that is not the most prominent aspect.  To me this painting so emotional, depicting the depth in the woman's eyes, which pervades her whole body and adds to her physical beauty.  With the warm red background and beautiful skin tone, the work creates a sense of deep feeling and connection between the subject and artist, and now a strong connection felt by the viewer. 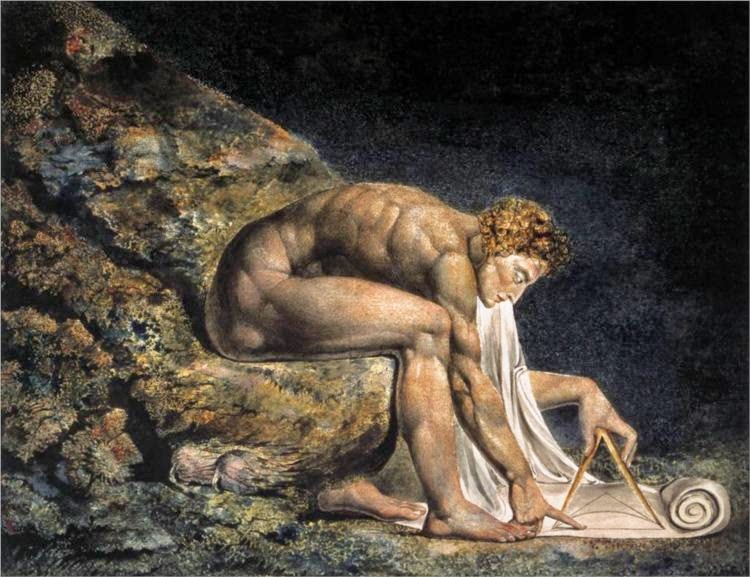 Williams Blake (1757-1827) openly opposed the work of Isaac Newton and his colleagues.  He wrote that "art is the tree of life.  Science is the tree of death."  Blake opposed the exclusion of God from the mathematical, mechanical universe that Newton described, and likened the scientific revolution to black cloth folding over Europe.  Despite his overt rejection of Newtonian ideals, Blake was apparently unable to dispel the Newtonian universe from his thinking.  This monotype  shows obvious respect for the scientist, depicting him as a heroic nude, well muscled and physically perfect as he might be in Classical and Renaissance art.  However, rather than standing upright as he would be in those styles, Newton is sitting on a rock, his focus entirely absorbed in a geometric drawing he is creating with a compass.  Blake places Newton is a very strange setting.  The rock he is seated on is the most colorful thing in the picture.  It is covered in moss and swaths of blue and red that actually make it look subaqueous.  A vast abyss stretches out in the background, which could be either the night sky or the vast, dark ocean.  The scene reflects Proverbs 8:27, which reads in the King James version, "When he prepared the heavens, I was there: when he set a compass upon the face of the depth."  Clearly Blake thinks Newton is to be revered, and, considering this Bible passage, actually likens him to a creator figure, but something is slightly amiss.  Rather than setting a compass to the "face of the deep" and inscribing the world, Newton is using his compass on a piece of paper.  Blake seems to think he was caught up in the theoretical and the mathematical, without simply observing and contributing to the wonder of God's creations around him.  I find this work quite fascinating, and when taken along with certain poems of Blake's, such as "Jerusalem" and "Auguries of Innocence", a very complex view of the Newtonian world emerges.
Posted by David B at 8:03 PM No comments: 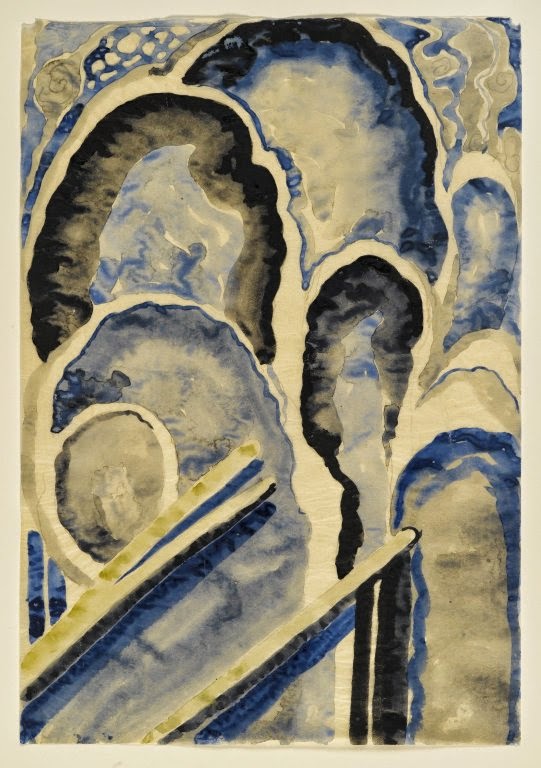 O'Keeffe (1887-1986) is of course best known for her many flower paintings, but she also explored many other themes, such as landscapes of the New Mexico desert where she spent most of her life.  This painting is quite different, and I am not entirely sure what to make of it, but I am quite taken with it.  Much more abstract than most of O'Keeffe's work, the shapes perhaps suggest human profiles, or perhaps hills or plumes of smoke.  Upon close inspection, there do seem to be shapes that resemble facial features, but could just be rock surfaces.  Even if there are eyes and mouths present in those swaths of grey, they are extremely too abstracted to form a figurative subject.  Instead what I love about this painting is the overall impression––of something large and unnameable, formless and dreamlike.  There is a certain surety in O'Keeffe's hand that allows her to express her vision so well.

Remington, The Scout: Friends or Foes


This is another beloved painting from The Clark.  It is very different from most work of Frederic Remington (1861-1909), which usually have a slightly cartoonish style and depict high-energy cowboy scenes, of which I am not the biggest fan.  But I love this painting.  Dominating the canvas is the figure of the scout on his horse.  They present the only real contrast to the vast white of the snow and the relatively similar sky.  This contrast is emphasized by the horse’s shadow behind them.  The starkest contrast is between the horse’s black body and the snow.  The shift is made more gradual by the horse’s white feet and nose but these also somehow make the contrast more striking.  The man on the horse is dressed in browns of a few shades and both he and his clothes seem out of place in this vast expanse.  He and the horse together cover all three plains of the painting, with his head crossing the sky and almost reaching the top of the canvas.  We see the footprints behind them and it seems clear that they have been traveling for a long time.  The settlement in the distance is brown like the scout’s clothes but it is so faint and could easily be missed when viewing the painting.  This seems to emphasize the ambiguity surrounding it.  The scout doesn’t know if it is safe to go there and neither does the viewer, in fact the viewer may not even be sure there’s anywhere to go.  I love the ambiguity the scene presents, and I think every element is simply beautiful.
Posted by David B at 7:51 PM No comments: