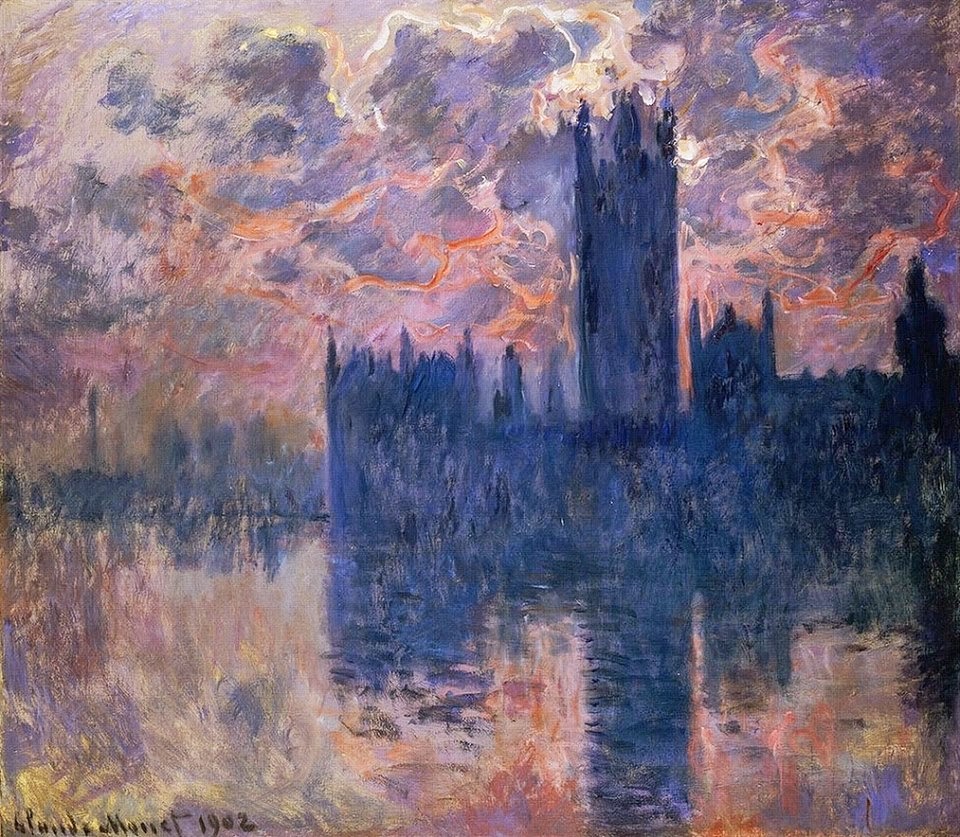 Today I decided to post about one of the paintings I discussed in my MA thesis.  Monet made three trips to London between 1899 and 1901 and painted over one hundred canvases there.  What Monet was really interested in was the interplay of the London pollution and the light on the Thames, and it is that smoky atmosphere that becomes the real subject of the series.

Houses of Parliament, Sunset is among the series’ most striking pieces, partly due to its clearly delineated clouds.  In this entry, as with many of the paintings, the position of the sun dictates the coloring to a precise degree.  Although the sun itself isn’t visible here, we can see that it is roughly behind Victoria Tower (the tallest in view).  The orange boundaries that indicate the bottom edge of each cloud seem to diverge from the tower, and the lightest areas in the painting are the two yellow spots at the top of the tower (just above and just right of the turrets), and the light pink that borders the tower on the right.  This painting shows us the intense coloration caused by the fog, and it also explores perspective, showing the fog at different distances.  For example, the Palace of Westminster, which is relatively near our vantage point, is not obscured by the fog.  Instead, hanging vapors are visible in front of it, which make the silhouette, caused by the sun’s position, even darker.  At the same time, in the distance, the left side of the painting shows some distant, unidentifiable buildings entirely obscured in smog.  In this painting and throughout the series, Monet portrays the fog’s effect on the city, the city’s effect on the fog, the fog’s effect on the sun, the sun’s effect on the fog, the fog’s effect on the river and sky.
Posted by David B at 9:00 PM