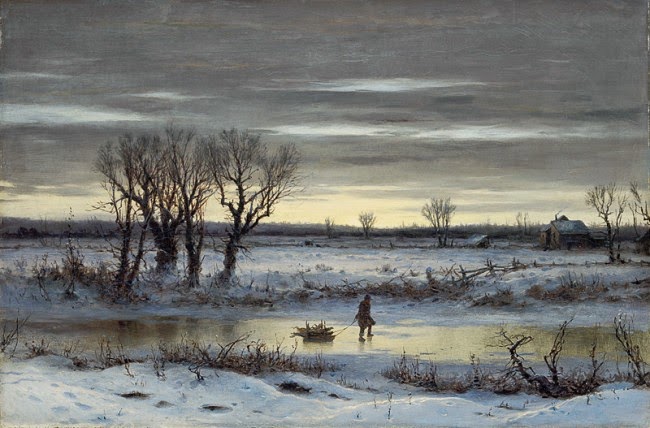 George Henry Boughton (1833-1905) was an American and English painter, known for his landscapes and genre paintings.  Born in Norfolk, England, his family emigrated to the United States in 1835 and he grew up near Albany.  Boughton demonstrated a natural talent began his career as a self-taught artist.  At age nineteen he was already recognized as a successful landscape painter.  He returned to England in 1853 to study for six months and sketch the English countryside.  After a few years back in New York, during which he exhibited repeatedly across the Northeast (and toward the end of which WInter Twilight Near Albany was painted), Boughton decided to move to Europe.  He studied in Paris for two years, then opened a studio in London in 1861.  Despite living in England, Boughton frequently painted scenes of American colonial history. Among his most celebrated paintings is Godspeed! Pilgrims Setting Out for Canterbury. Boughton also painted scenes of everyday life, which show thoughtfulness and depth.  Winter Twilight Near Albany is a beautiful example of Boughton's skill with landscape.  He conveys the still and quiet character of this cold evening by a frozen pond. Much of the painting's power comes from the narrow palette.  All the colors are repeated.  The brown of the lifeless trees and shrubs is also in the boy's coat and the distant barn.  The gradient of white to grey that colors the snow is continued in the sky's icy clouds.  Most prominently, the yellow of the sunset is reflected in the pond.  This gives the peace spatial symmetry, as well as emotional resonance. With such a small figure trudging through the winter landscape, we feel expanse of this frozen field and the beauty of this crisp, chill winter twilight.
Posted by David B at 10:52 PM