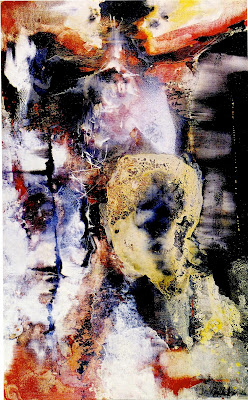 Paul Jenkins (1923-2012) was an American abstract painter.  Born in Kansas City, Missouri, as a boy Jenkins met Frank Lloyd Wright when he was hired by his uncle to rebuild a church.  The great architect encouraged the young Jenkins to pursue agriculture rather than art.  His uncle then encouraged Jenkins to visit Thomas Hart Benton, who encouraged Jenkins in his aspirations. After serving in the Navy, Jenkins moved to New York in 1948 and studied at the Art Students League.  Around this time, Jenkins met leaders of the first generation of Abstract Expressionists—Mark Rothko, Lee Krasner, Jackson Pollock, and Barnett Newman.  In 1953 he traveled to Europe and eventually settled in Paris, divinding his time between Paris and New York.  His first solo exhibition was held in Paris in 1954.  His first important sales were Divining Rod (1956), purchased by the Whitney Museum, and Peggy Guggenheim's purchase of Osage (1956). Although he always worked in pure abstraction, Jenkins's paintings do evoke natural formations like mountains, waves, amber, or marble.  Beginning around 1960, Jenkins moved away from oils toward acrylics, creating pieces that appear as veils of color.  Although they look like staining, they were produced with pouring and spreading with an ivory knife.  He frequently used the word phenomena in his titles, giving his work an air of the supernatural.  Later works like Phenomena Astral Tundra (1986), Distance Finding Mozart (1992), and Phenomena Wind Arch (2009) use a similar technique but continue to explore its diverse possibilities.  The Archer is one of Jenkins's earliest pieces, demonstrating the rich texture and dense composition that marks his early work. There is possibly a vague human figure with a bow drawn suggested in the black that forms something of a background, but mostly the painting is an explosion of color with all sorts of shapes and sights available to the viewer's interpretation.  To me there is ecstasy here, with the possibility of being overwhelmed by the intensity of these colors.
Posted by David B at 7:55 PM