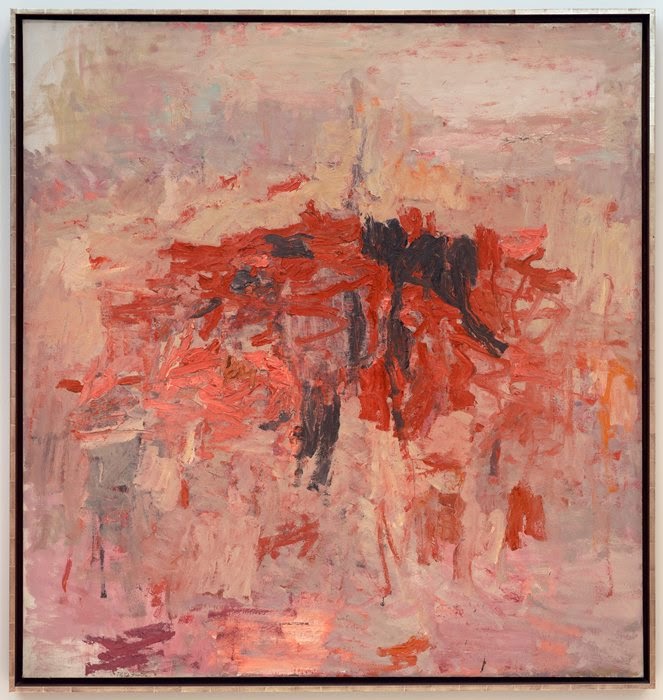 Philip Guston (1913-1980) was a painter and printmaker of the New York School, and was a member of the Abstract Expressionist movement, however he is also known for Neo-expressionism, which he pioneered when he moved away from pure abstraction and returned to figuration.  The child of Ukrainian Jewish immigrants, Guston was born in Montreal before the family relocated to Los Angeles.  Guston began painting at age fourteen, a few years after his father hanged himself and he found the body.  He attended the same high school as Jackson Pollock and studied with the same art teacher.  Guston moved to New York in 1935, where he worked for the WPA, like many New York School artists.  By 1967, Guston had grown frustrated with abstraction and returned to representational art.  For M is from the height of Abstract Expressionism, when Guston used thick strokes of paint in rich colors, applied over complex backgrounds.  In this piece we can see the complex shapes created by these many shades of red.  As the brightest colors at the center fade toward the edges, we can see the movement of Guston's hand.  He applied paint using traditional brushwork, but the energy and ferocity of his brushstrokes is quite visible.  The addition of a small amount of black gives a piece the sense of death and darkness, that may be suggested by the cluster of red at the center, but would likely not be so intense without the inclusion of the black.  Like many artists at the time, Guston is responding to the intense confusion of the postwar period, in this case with a thick knot of red marks to bloody up the canvas.
Posted by David B at 7:25 PM