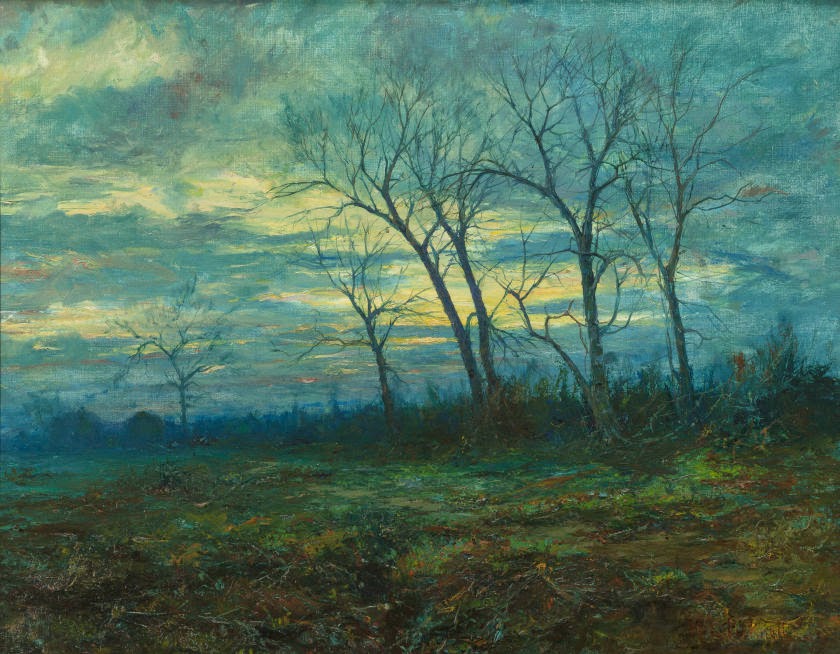 William Lamb Picknell (1853-1897) was an American painter, mostly of landscapes and seascapes who was particularly known for his frequent use of reflected sunlight and for his scenes of receding space.  Born in Vermont, Picknell was orphaned as an adolescent and then lived with his uncle in Boston before going to Europe at age twenty.  He began studying fine art with George Inness in Rome before entering the École des Beaux-Arts in Paris.  Picknell found success in France and stayed there for a number of years.  He exhibited in the 1876 Paris Salon and participated in several after that.  He won a medal at the 1880 Salon, the first American to do so in landscape.  Picknell spent his last years in Massachusetts.  Picknell's best known works demonstrate a distinct academicism, borne out of his study in Europe.  Eventide is a rather different painting.  Rather than those crisp lines and carefully drawn scenes, this forest is wild and rough.  While it is not clear whether these trees or dead, or if it is just winter, the overall impression of the piece is a bit ominous, suggesting destruction and deterioration.  The palette is extremely interesting, mostly ranging between blue and green, with the grass and turquoise cast to the sky.  There is also the yellow sun with some brown on the ground.  Yet despite the overall brightness and richness of the colors, the canvas looks quite dark, giving that ominous pall.  The painting is quite intense, and, especially with the title of Eventide, gives the impression of a darkening and waning as night swallows these trees.
Posted by David B at 9:01 PM