Sebastiano Ricci, Satyr and a Farmer 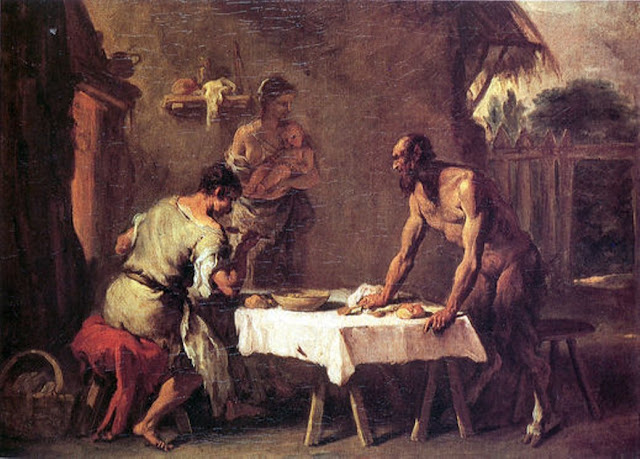 Sebastiano Ricci (1659-1734) was a prolific Italian painter of the late Baroque period.  Born in Belluno, he became an apprentice in nearby Venice.  After a hurried marriage that resulted from an unwanted pregnancy, and after being briefly jailed for the attempted poisoning of the young woman, Ricci and his new family moved to Bologna and his technique became a mix of Venetian and Bolognese styles.  He began to receive commissions and have artistic success, however he continued to be a horrible man, and Ricci abandoned his wife and daughter in Bologna.  He fled to Turin with the young daughter of another painter but was arrested and nearly executed, but for the intervention of the Duke of Parma.  He spent the next several years working all over Italy on various commissions.  He also worked in London and Paris.  Proving that the wicked are not necessarily punished for their misdeeds, Ricci died a rich and successful man.  Like most artists of the period, he painted mostly history paintings, often scenes from mythology and the Bible.  He did also paint some genre pieces.  What I find fascinating about Satyr and a Farmer is the mixing of mythological and genre painting.  This is a genre scene, of a simple farmer and his family eating a meal outside their home.  However Ricci inserts a Satyr into the scene.  This undermines the intention of genre pieces, to depict the reality of everyday life, and calls attention to the element of fantasy at play in all art.  Ricci's skill is on display here in the sensitivity of his brushwork all over the canvas, but particularly in the rendering of the satyr's legs, where the fur and hooves are quite detailed and lifelike.  There is also a naturalism about the satyr's pose and body.  Therefore, the genre painting is made fantastical by the presence of the satyr, while the satyr is also made more realistic and naturalistic by his context in the genre painting.
Posted by David B at 8:51 PM