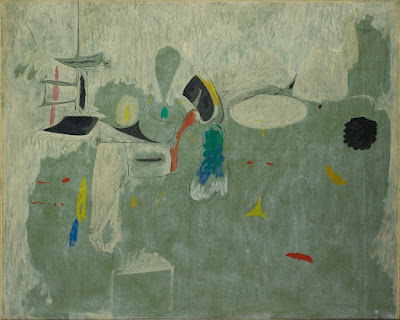 Arshile Gorky (1904-1948) was born Vostanik Manoug Adoian.  He was an Armenian-American painter and a leading figure in the formation of Abstract Expressionism.  Born in Armenia, Gorky's father fled the draft in 1908 and came to the United States, leaving his family behind.  In 1915, Gorky escaped the Armenian Genocide with his mother and sisters, but his mother died of starvation in the aftermath.  The children arrived in the United States in 1920 and reunited with their father, but he and Gorky never grew close.  Gorky shed his Armenian identity, taking a new name and often claiming to be a Georgian nobleman. He enrolled at the New School of Design in Boston.  Gorky's earliest works show a strong Impressionist influence (particularly Cezanne), but he soon began exploring Cubism.  In 1933, he became one of the first artists employed by the WPA, where he would meet the group that would eventually become the New York School, or Abstract Expressionists.  Gorky's first works of pure abstraction still show the strong influence of Picasso as he works to understand and express the organization of space.  His style comes into its own in the 1940s.  The Liver is the Cock's Comb (1948) is often considered his greatest work and the truest expression of his style.  Sadly, after a series of personal and professional difficulties, Gorky hanged himself in his barn in Connecticut in 1948.  The Limit is a piece from Gorky's period of greatest creativity.  The large stretch of green is marked with a few shapes that seem to teeter on the edge of something.  There is a surprising amount of motion in this piece, as though the shapes join to form a mobile.  The colors are well chosen, subtle and beautiful yet striking.  This large painting makes quite an impact, challenging the viewer to see its complexity and its strangely fascinating balance.
Posted by David B at 9:46 PM