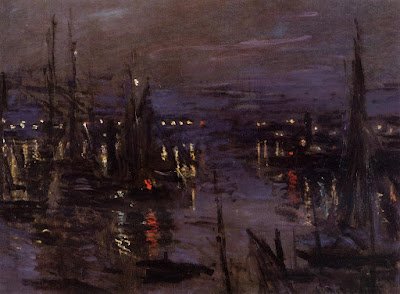 This marks my 300th post!  I chose this early painting of Monet, whom I wrote about in one of my earliest posts (before I really had my format down).  Claude Monet (1840-1926) is of course one of the most famous painters there is.  He was a, if not the, leader of Impressionism, and works such as his many water lilies and Japanese bridge at Giverny are among the most iconic paintings in the world.  Monet had a long and diverse career, and I had a lot of difficulty choosing which painting to feature.  The sheer volume of his out put is a bit staggering.  I eventually settled on this early depiction of his hometown of Le Havre.  Le Havre is a port city in the north of France on the English Cannel, and Monet was very influenced by the shipping and industry he observed. The modern shift toward industrialism became one of the most enduring themes in Monet's work. This view of the port is a rather dark painting, with the lights popping out of the darkness. Although it predates the official start of Impressionism by several years, this piece's hazy vision of the night scene is very in keeping with Impressionist characteristics.  The shapes are not clearly defined, but made up of indistinct lines and shapes.  The colors blend together to create a scene of great intensity and mystery.  We cannot entirely see everything that is happening in the scene, just as Monet, presumably, could night see everything before him on this dark night.  Part of the reason the painting is effective is because there is so much we can't see or interpret.  We are left peering into the darkness, uncertain of how much of the action we've observed.  The ships and buildings blur together to create an impression of the scene.  In spite of the looseness of his brush, Monet's strokes were always very deliberate, for he was committed to accuracy. We can see this especially in the reflections of the ships to the left, and the difference in his brushstrokes between the water and the sky.  What Monet gives us a view of the modern Le Havre, but viewed through the hazy dark of the night, so that elements like the yellow and red lights, the waves of his brushwork, and the rich purple that pervades the scene become the focus of this seascape.
Posted by David B at 8:11 PM