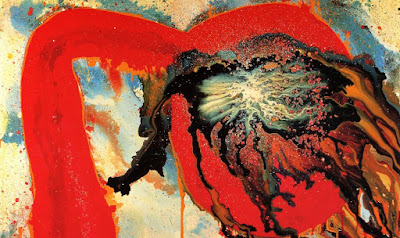 Sadamasa Motonaga (1922-2011) was a Japanese artist and a leader of the Japanese avant-garde movement.  Motonaga studied fine arts in Osaka and founded the Gutai Movement along with Kazuo Shiraga.  The two artists are often compared for their robust and expressive abstraction.  Motonaga was also a master of negative space, creating shapes within a discrete space, where the composition seems to constitute interaction.  Motonaga is also known for his later works, almost computerized in their cleanness of form, which he began to produce in the 1970s.  Towards the end of his life he combined the two styles.  1962's Work is a prime example of Motnoaga's flowing style, and one of his most celebrated pieces.  It contains some very evocative forms, that could perhaps suggest a neuron or a nebula, and intensely vibrant colors. There is significant motion in this piece, as though the thick paint is churning and swirling over the canvas.  We feel the intensity behind the artist's every motion, and the deliberate paint application.  This large painting can envelop the viewer, drawing them into this deep well of color and light.
Posted by David B at 9:29 PM