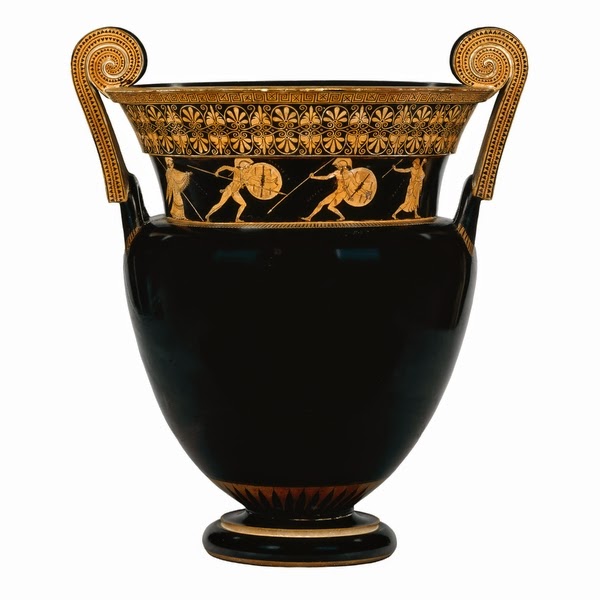 detail of Achilles and Hector

This Attic vase, painted in red-figure style, shows the fateful battle between Achilles and Hector at a moment just before Achilles' victory.  The battle, which would decide the outcome of the Trojan War, forms the climax of The Iliad.  The figure-scenes only occupy a narrow band on the lower neck of this krater, leaving the body an uninterrupted expanse of black.  We see Achilles attacking Hector from the left, the traditional direction for the victor, each hero backed by his patron, Athena and Apollo respectively.  The two figures mirror each other as Achilles advances and Hector falters.  Achilles stands in a powerful pose, with his weight on his front left leg as he prepares to thrust with his spear.  His back leg is straightened, about to spring forward, and he holds his shield in front and next to him, ready to defend himself should Hector surprise him with an unexpected blow.  Hector’s stance is the exact opposite: his front leg is straightened and his back leg bent as he falls backward.  His shield-bearing arm extends behind him, the heavy shield falling useless away from him.  Achilles appears completely protected, both spear and shield poised and ready; Hector is completely exposed with both arms flailing widely.  In mirroring each other the two men create a strong shape; their two straight legs parallel to each other, and their spears the distinct intersection of two lines.  The two gods appear in endorsement of their chosen hero, but in this final confrontation of Hector’s life their roles are very different.  Athena fully supports Achilles with her arm raised in the direction of his attack.  Apollo, however, has fully supported the Trojans, but now must yield to fate.  Hector is fated to lose this confrontation and Troy the war.  Therefore Apollo has no choice but to turn away from Hector and he appears to be leaving the scene.  However, he holds an arrow parallel to Hector’s spear to show that still supports him, but can simply do nothing to help him.  To me, the anonymous painter (though perhaps known through other examples of his work) very successfully conveys the pathos of this scene.  Although Hector's death is imminent, the two heroes still face each other as equals, and the defeat of Troy will be the sad result of this clash.