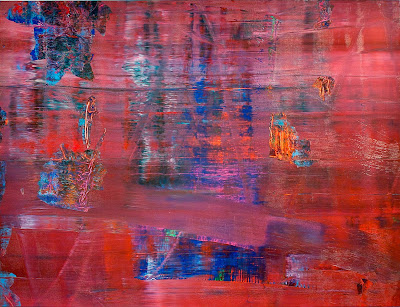 Gerhard Richter (b.1932) is a contemporary German artist, and an important contributor to modern European painting.  Born in Dresden, his father was a schoolteacher and his mother was a bookseller.  The family managed to remain mostly apolitical during most of the Nazi regime by moving to the Polish countryside, although eventually Gerhard's father was forced to join the party, but it was in name only.  After leaving school in tenth grade, Gerhard apprenticed as an advertisement and set painter, then studied at the Dresden Academy of Fine Arts beginning in 1951.  Richter's earliest works show promise, but it is not until he began exploring abstraction that his work becomes truly impressive.  However, unlike many artists, Richter does not, nor has he ever, work in a consistent style; he has worked in styles as diverse as mechanical grids, serpentine forms, subverted portraiture, and photography.  Nevertheless, his large, colorful abstract canvases are perhaps his most effective.  These pieces speak to the frenzy and uncertainty; they are thick and obfuscated, full of rapid motion and overlapping colors.  His recent works continue to explore the nature of color and abstraction.  Abstract Painting (849-3) exemplifies Richter's signature style, with large swaths of red dominating the canvas.  There is an aggression to this piece, particularly in the stripe of red that covers up the blue in the center. This piece has a lot of power, and with its imposing size of over eight by eleven feet, the painting is quite imposing.  There is a physicality to the work, necessitated by painting such a large canvas with such large strokes.  It is tempting to read statements about the chaos of the modern world into Richter's work, and while such ideas may be present, the emotional force of the color is more central to the work.  Richter used a complex process of continual layering and scraping of paint to create this rich, multilayered painting and give it its complex and textured power.
Posted by David B at 8:13 PM