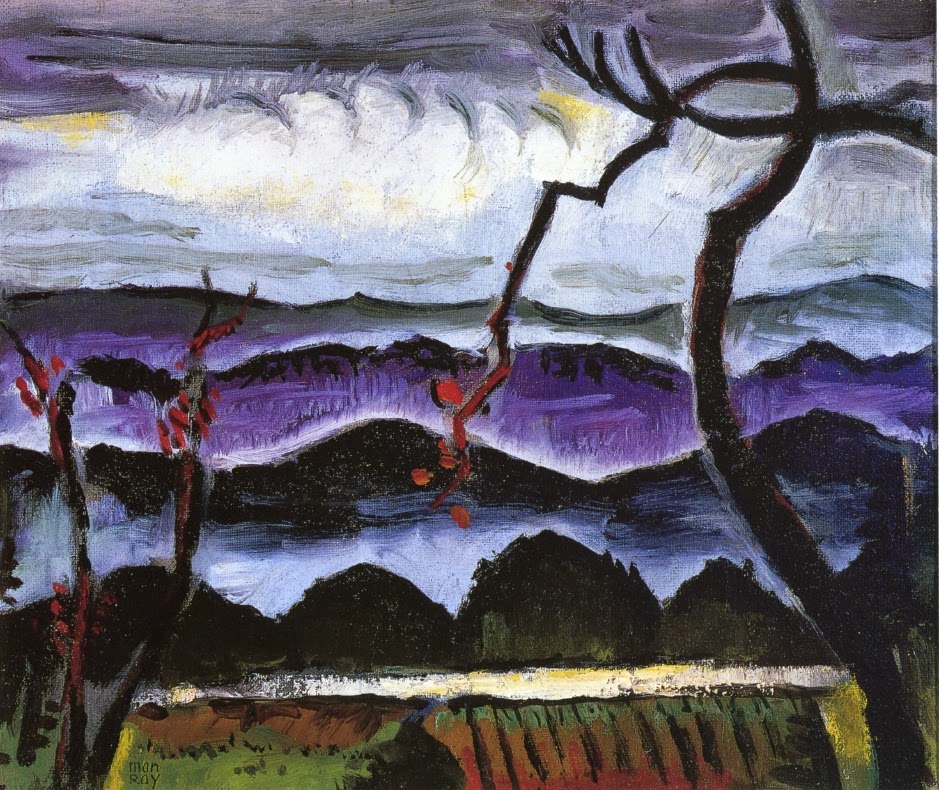 Another day, another Dadaist.  Man Ray (1890-1976) was born Emmanuel Radnitzky in Philadelphia.  He was involved in both Surrealism and Dadaism after becoming friends with Duchamp in New York in 1913, having seen his work at the groundbreaking Armory Show that year.  Both the show and Duchamp were very influential on the young artist, and his work begins to show movement and development at this time.   Man Ray's early work also explores Cubism.  Although Man Ray is best known for his photographic works, and he worked in a variety of media, he preferred to regard himself as a painter.  Later in life he said, "I paint what cannot be photographed, that which comes from the imagination or from dreams, or from an unconscious drive."  This impulse is certainly present in this painting; Hills shows a landscape that seems infused with storms of the unconscious.  The angular and solid hills clash with the round evanescence of the clouds, while the trees in the foreground cut and interrupt all these shapes.  The red buds on the trees are jarring, yet suggest renewal in the face of the storm clouds and imposing black and purple mountains.  Although Man Ray is not associated with the movement, this painting seems quite Expressionist to my eye.  It presents the scene in a rather subjective way, privileging emotional or poetic reality over literal reality.  With this small canvas, Man Ray creates a scene of great power and thoughtfulness, at a time of great transition in his life.
Posted by David B at 7:26 PM