Paul Gauguin, At the Black Rocks 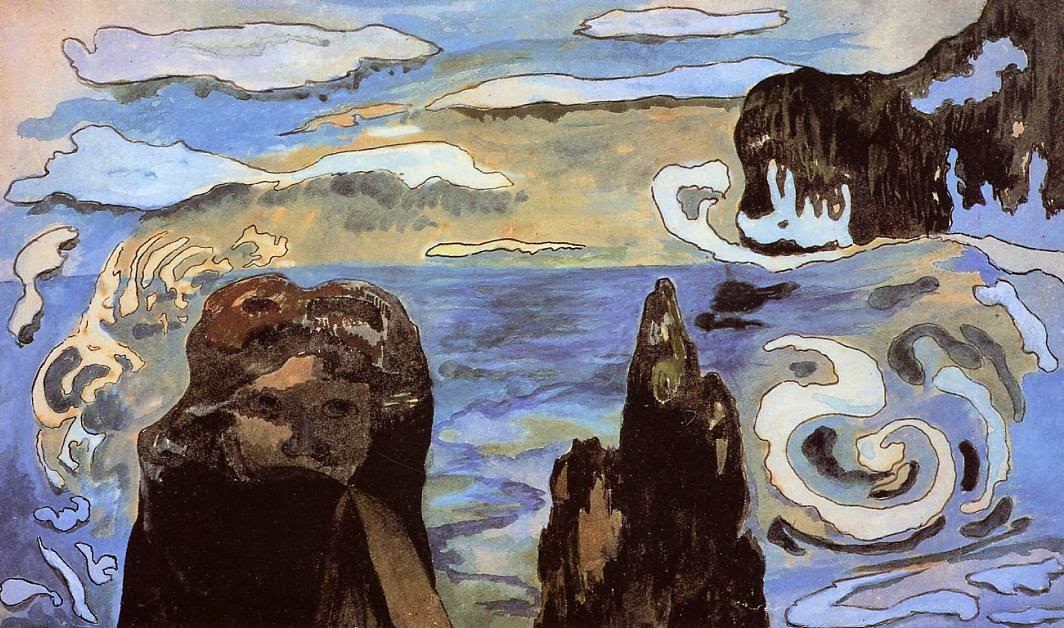 Paul Gauguin (1848-1903) is most famous for his interest Primitivism, developed when he traveled to French Polynesia.  He wrote a book about his experiences in Tahiti and spent the last years of his life there.  These paintings, as well as many of his earlier Symbolist works, are marked by bright colors, strong contours, and flat, heavy forms, in a style that came to be known as cloisonnism.  However the bulk of Gauguin's work is in a more traditional Post-Impressionist style, with realistic pastoral scenes and traditional portraits.  At the Black Rocks (also known as Rocks by the Sea) is a synthesis of these diverse styles.  One of the strongest influences on this piece is Japanese art, which features similar depictions of nature, and the overall unity of the scene, the way the different natural elements come together in the picture plane, has a distinctly Japanese cast.  Japonisme was extremely popular during the Impressionist movement and its impact carried on into Post-Impressionism, including the work of Gauguin's close friend, Van Gogh.  (I also seriously considered writing about a different Gauguin painting that has similar use of Janponisme.)  In this painting I am particularly taken with the the swirling waves and their mirroring/merging with the clouds.  Gauguin manages to convey the movement of the wind and water as weel as the serene stillness of the scene.  The particular color choices are also quite beautiful, and Gauguin achieves a very rich texture, almost creamy in the white and blue, yet rough and weatherworn in the brown rocks.  A final point of interest is that there seems to be a face on the leftmost rock, but I don't really know what to make of this.
Posted by David B at 9:49 PM