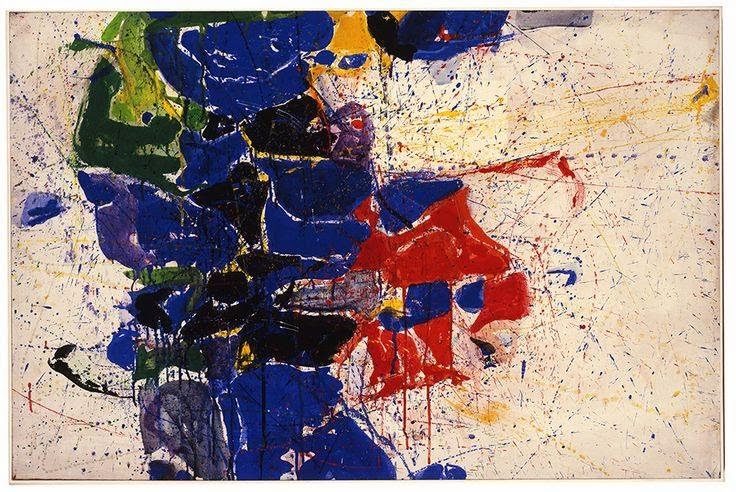 Sam Francis (1923-1994) was an American painter and printmaker whose works primarily interpret the role of color in bold and complex ways.  Although sometimes associated with the second generation of Abstract Expressionists, such as Helen Frankenthaler and Joan Mitchell, Francis was never a member of the group.  Unlike those artists, who worked out of New York, Francis spent most of the 1950s in Paris.  Born in San Mateo, California, Francis joined the Air Force.  He was in hospital in California for several years, where he began to paint after being visited by the painter David Park.  After the war, he attended UC Berkley, where he studied botany, medicine, psychology, and art.  Francis had his first exhibition in Paris, but soon was exhibited internationally, including MoMA and the Kunsthalle Basel.  Francis's work explores color in a variety of styles and contexts, including works that resemble color field and others that resemble dense webs of color.  Many of his works simultaneously resemble geometric and natural forms. Middle Blue No. 5 demonstrates many characters and elements of Francis's work. The large gathering of paint that dominates the painting certainly draws the eye and we can see the complicated ways that Francis fit these many smaller patches of color together.  Sometimes he places patches of the same color together but often he separates them with another color. Each patch of color seems to radiate outward with the streaks and splatters that cross each other and stretch across the canvas.  In this piece, Francis shows us each color in isolation and interacting with all the others.  It is a masterful expression of shape and color from one of the great abstract artists of the century.
Posted by David B at 9:24 PM