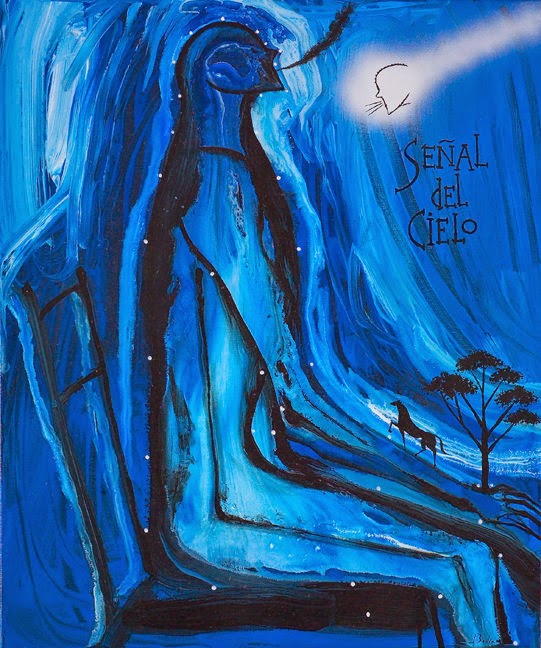 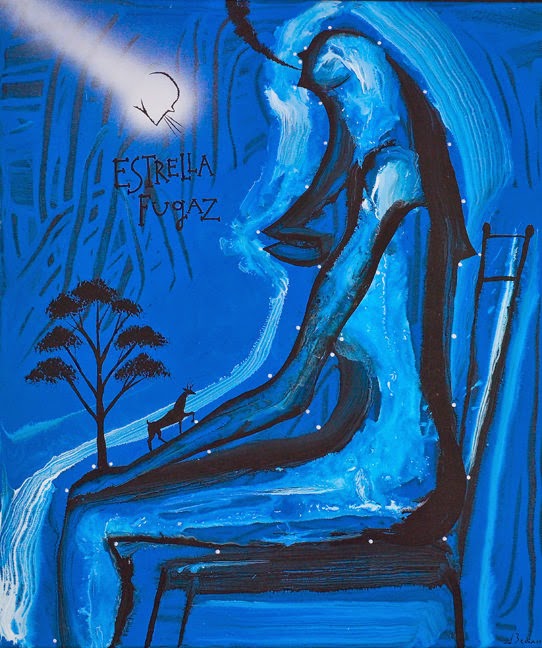 José Bedia Valdés (b.1959) is a celebrated Cuban painter who draws on African, Latin American, and Native American traditions in his work.  Bedia is interested in many different themes and styles, but often portrays cosmic motifs and explores humanity's relationship to the universe and spirituality.  These themes are quite present in this pair of paintings.  Señal del Cielo and Estrella Fugaz (Sign from Heaven and Shooting Star) are based largely on Egyptian imagery.  These figures recall the posture of Egyptian statuary where Pharaohs are seen sitting straight and stoic, hands resting on their knees.  The figures in these paintings are in the same pose and are clearly referencing this iconography, an association underlined by the male and female pair (for the Egyptian statues are often in pairs of Pharaoh and Wife).  However the impression here is very different.  Rather than sitting on thrones, they are on simple chairs, and they do not sit stoically, but instead they receive and emit the energies of the universe.  The connection to cosmic spirituality is further illustrated by the trees growing from their knees and the animals climbing their arms, a horse for the man and a giraffe for the woman.  The blue coloring of the pieces (and the silhouette of the trees and animals) gives the sense of a nighttime scene with the white dots that outline the figures looking like stars; therefore, the figures take on the appearance of constellations.  Each painting is marked with the outline of a head, surrounded in white and blowing wind.  This aspect seems to be the message from heaven and the shooting star that that the paintings are named after, again placing the paintings in the spiritual realm.  These pieces also have a sense of magical realism about them, a recurring feeling in Bedia's work.  Ultimately these beautiful paintings explore our connection to our world and depict the interconnectedness of the universe.
Posted by David B at 8:54 PM