Joseph Zaritsky, Life on the Kibbutz 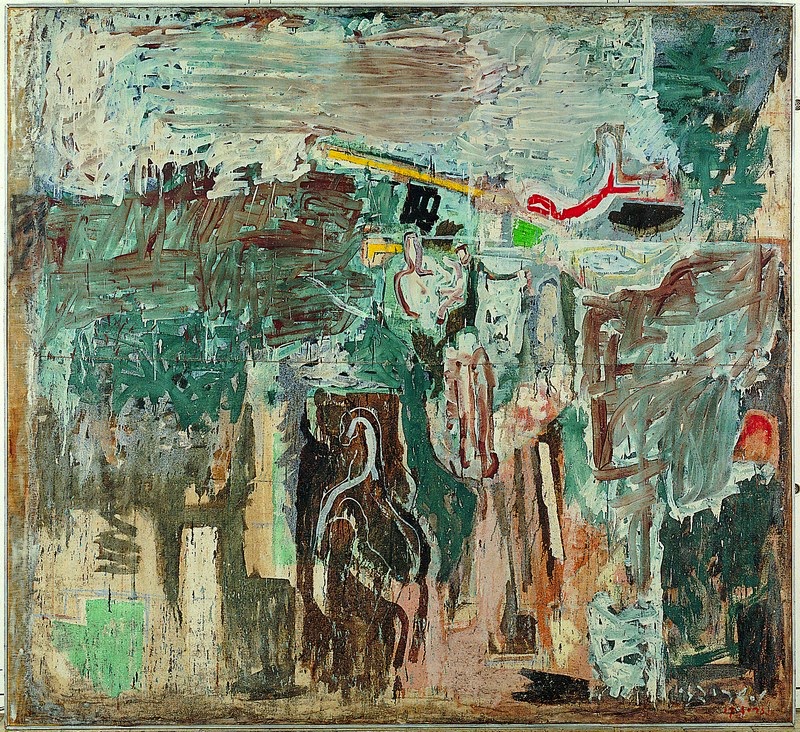 Joseph Zaritsky, Life on the Kibbutz, 1951

I have wanted to write about this painting for some time, but I haven't really known what to say about it.  It is a gorgeous work, and I am quite mesmerized by it, but beyond that I was at a loss.  I see lots of things in this painting.  Joseph Zaritsky (1891-1985) spent a few years living on the Yehiam Kibbutz.  A kibbutz is an agricultural commune attempting to create a small, utopian society and incorporating ideas of socialism and Zionism.  During his years there Zaritsky painted a series of watercolors which this abstract piece is derived from.  The canvas is dominated by these swaths of green, which could be depictions of grass or be a less literal representation of the importance of agriculture and the land in the society.  If I look at this painting long enough figures do start to emerge: what might be a mother and child hover near the center of the painting, and a horse is rearing on its hind legs just below and left of them.  On the right there may be a figure of a man, possibly the artist, as his hand seems to be raised and holding something that may be a paintbrush.

I see these things, but they are afterthoughts.  These figures are not what effect me when I first see the painting; they are not what weighs on me as I consider it, and they are not what stays with me when I turn away.  Instead I see a meditation on Zartisky's place in the world, and on Israel's.  This was 1951 and Israel, only three years old, had not come into focus yet.  Zaritsky moved to Jerusalem from the Ukraine alone in 1923.  He was a powerful force in the art world there and an important promoter of modern art, both before and after the establishment of the Israeli state.  He was very connected to Israel and its significance for Jews.  When I look at this painting, what I really see is a yearning for the life that the Kibbutz strove for––peaceful and secure, worthwhile and deep, equal and perpetual.  These are the things many Jews hoped for in Israel, but the turbulence of the region and of Jewish life has not improved.  This painting is about the desperate efforts to bring peace and order to our world, to our kibbutz and the impact and beauty we feel in this painting is the expression of that dream.