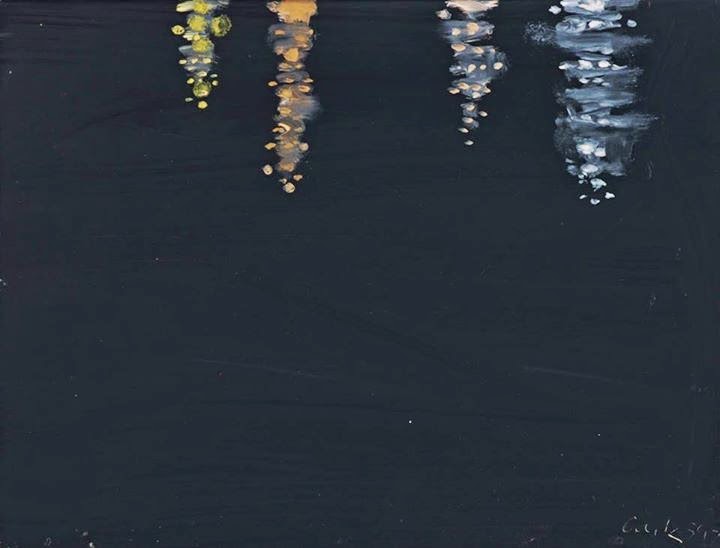 
Alex Katz (b.1929) is an American artist who has worked in a variety of media, though he is best known for his paintings.  He is considered a key figure in the evolution of pop art, although his work generally resembles the movement in appearance rather than intent or ideology.  Katz paints in a number of genres, but throughout his work, he consistently reduces a subject to its most basic elements. This is evident in his portraits, landscapes, seascapes, flowers, and trees.  Katz includes just enough information to communicate the content of the scene, whether simple petals and stems to create flowers, or the complex strokes needed to evoke churning waves.  By depicting only the essential lines of a subject, Katz manages to convey the emotional and physical truth of it.  In West Palm Beach, the approach creates a beautiful and fascinating piece. On a large expanse of dark blue, we see four small tendrils of color stretching into the dark. Through the use of spots and hazy lines, Katz depicts the reflections of light from the Palm Beach nightlife on shore.  The dark blue, then, is the ocean off the coast.  This simple, small painting evokes the bright attractions of the city, but does so by displaying so little that it becomes alluring and mysterious.  We have the view of someone far out to sea and looking on from a distance, and Katz challenges us to move closer and explore.
Posted by David B at 6:30 PM