Carl Moll, Salon in the House on Hohen Warte 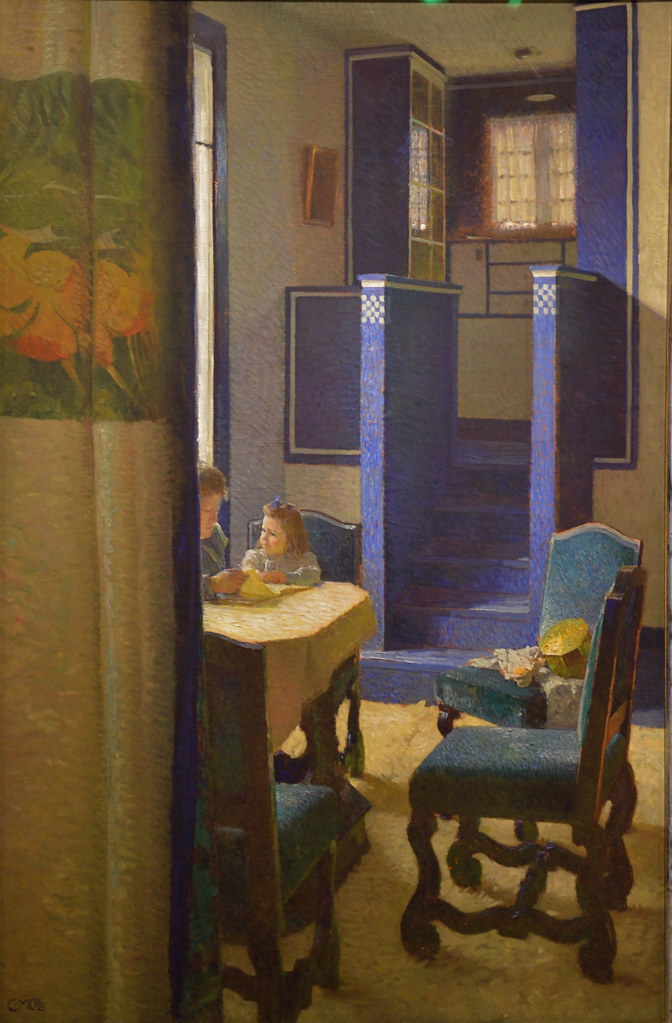 Carl Moll, Salon in the House on Hohen Warte, 1903

Carl Moll (1861-1945) was an Austrian painter who studied at the Academy of Fine Arts Vienna. Along with Gustav Klimt, he led the Vienna Secession, when modern artists split off from the Austrian academy in order to exhibit more avant-garde art.  Moll is considered a painter of art nouveau, but his style is quite diverse, ranging from somewhat Impressionist, to Expressionistic, to surrealist fantasy.  These landscapes show Moll's range and development, as his interest in well as the hidden depths of our surroundings.  In each example, we see the trees bend and twist in the fabric of the world.  Among Moll's most interesting pieces is his 1906 self-portrait; he portrays himself at work while surrounded by works of other artists (including a Van Gogh on the upper left).  Salon in the House on Hohen Warte is fascinating largely due to its use of space. The vantage point is situated behind a screen, peeking furtively, almost voyeuristically, into the room beyond.  The viewer cannot enter the primary picture space, and instead must lurk on the outside and try to see in.  What Moll shows us upon entry is a visually unusual scene.  The room recedes, stretching up the steps and showing the true spatial relationship of everything in the room.  The effect is a bit unnerving, but quite engaging.  Moll enhances the technique immensely with that rich azure blue.  The color draws the eye so that we take in the entire room, and gives the background much more visual prominence than is common.  In the foreground (well middleground if we consider the screen), the two figures are quite small and the woman's face is even cut off by the screen, but they are important for drawing the composition together.  They provide a narrative focal point, and would usually be the center of visual attention, but Moll shuns that expectation. He even gives the richly textured chairs more prominence.  With all of this in mind, the painting becomes an exploration of the nature of space, the relationship of subject and painter, as well as some very bold interior design.
Posted by David B at 9:24 PM