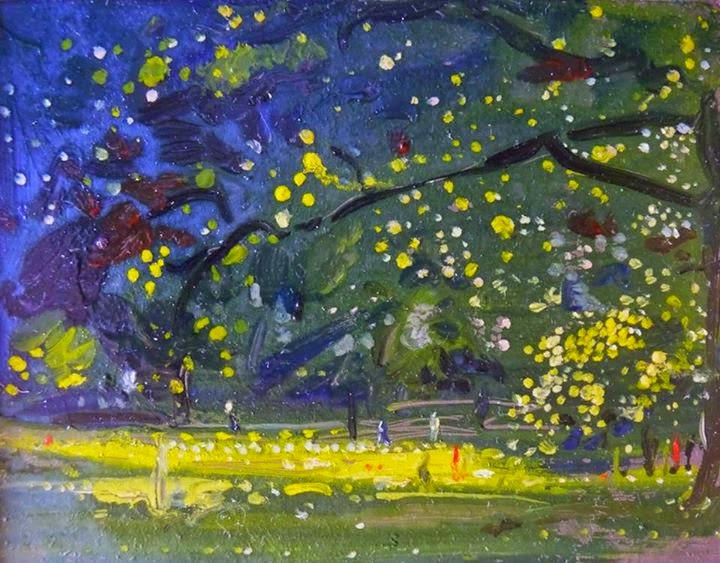 Tadeusz Deregowski (b.1969) is a contemporary artist.  Born in Zambia, Deregowski grew up in Aberdeen, Scotland and attended the Edinburgh College of Art.  Deregowski has lived in many places, including New York, and now resides in Brazil.  In his travels, Deregowski has painted the places he's been, including Aswan, Luxor, Coney Island, and Brazil.  Although he has mostly worked in landscape, Deregowski has also painted still lifes and portraits.  One of his most lauded paintings is Such Indulgence, which shows distinct influence from both Cubism and Fauvism. Central Park Symphony is an engaging painting for a number of reasons.  The piece presents a loose rendering of its subject, with the features and visitors of Central Park barely discernible.  In addition to blurring the scene, the painting blurs the distinction between light and matter.  This nighttime scene is very well lit, and while no light source is visible within the frame, it definitely seems like it is.  Deregowski has made the leaves appear to glow and illuminate the scene. Whether like stars or fireflies or streetlights, on first glance those leaves look like so many lights popping across the canvas.  Toward the left of the painting, when the greenery of the trees gives way to the deep blue of the twilight sky, the luminous leaves do give way to actual stars, but the transition is barely noticeable.  Every element combines to create this illuminated night, a symphony of stars and leaves, all lighting up the park.
Posted by David B at 6:59 PM