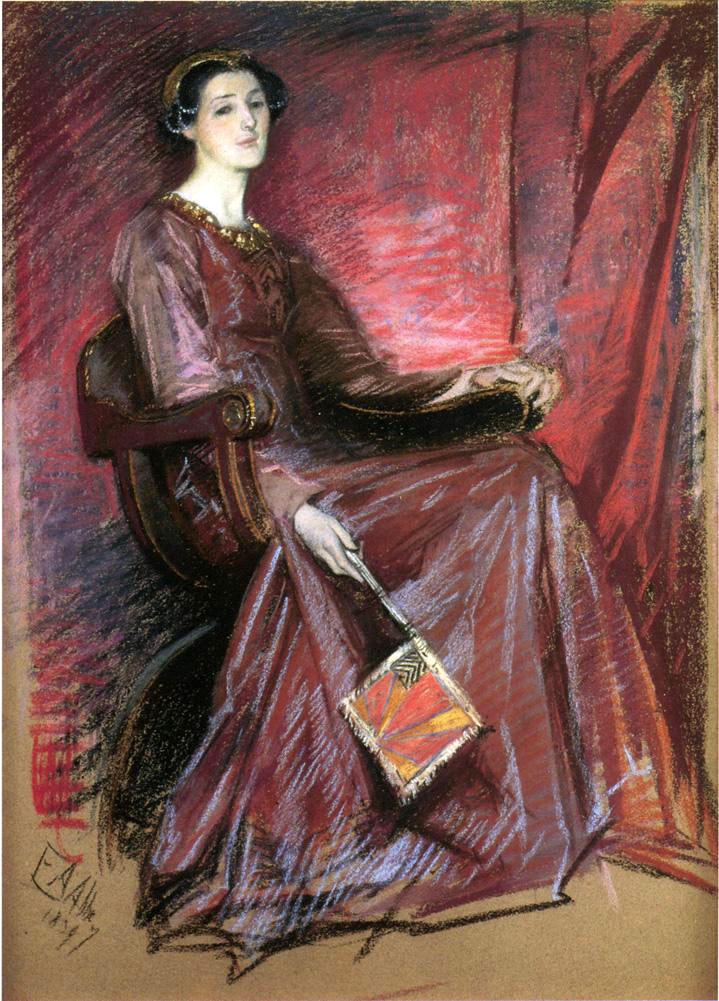 Edwin Austin Abbey (1852-1911) was an American painter and illustrator, particularly known for his depictions of historical and Shakespearean scenes.  Among his best known works is his Coronation of Edward VII.  Abbey was born in Philadelphia and attended the Pennsylvania Academy of Fine Arts.  After initial success with his illustrations in publications like Harper's and Scribner's, Abbey moved to England in 1878 and eventually became a fully member of the Royal Academy.  This is how he came to be chosen to paint the official coronation portrait for King Edward VII.  This portrait of a seated women is a beautiful one, simple yet deep.  The piece is a drawing done in pastels, which accounts for the sketch-like appearance.  The rich color is one of the most engaging things about this work.  The variegated backdrop, displaying many shades of red, blends with the reddish-brown chair and the burgundy dress, with its beautiful drapery and fine shading.  Consequently, the woman becomes somewhat effaced, almost a feature of the scene and nothing more.  However her pale skin and dark hair command our attention, with her unusually long neck to keep our interest.  Abbey named the piece after her headdress, which is noteworthy in and of itself, but does not draw the eye the way her face does.  It is clear from this work that Abbey utilized the medium of drawing quite effectively, for the unfinished appearance of this drawing underscores the question of the subjects identity, perhaps not fully formed.  Her presence hovers between commanding and faded, just as the piece hovers between unfinished drawing and completed artwork.
Posted by David B at 7:58 PM