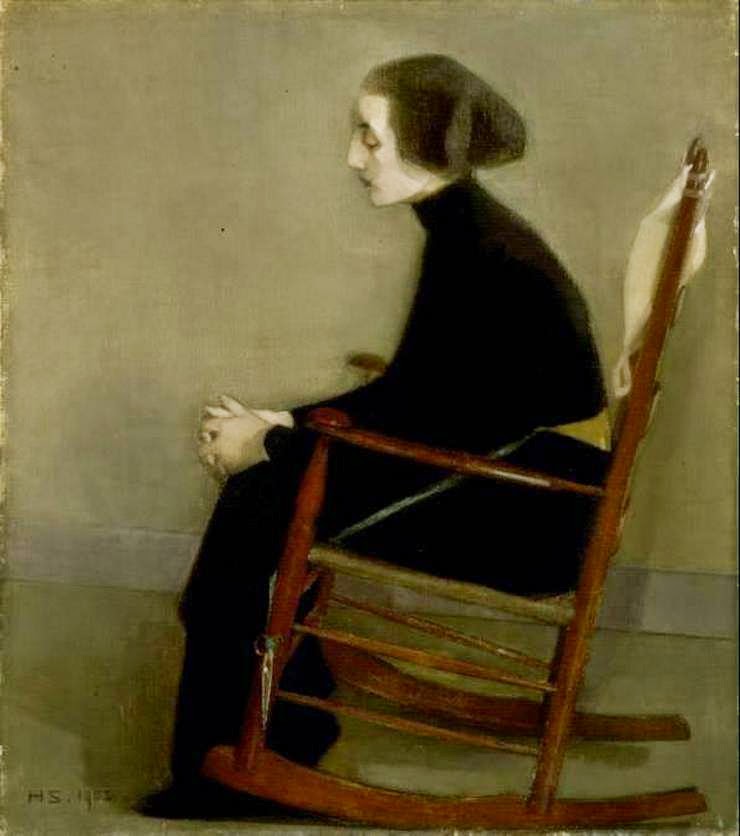 Helene Schjerfbeck (1862-1946) was a Finnish painter, known for her works of Realism and her self-portraits, though she also explored landscape and still life.  Born in Helsinki, when Finland was a Duchy within the Russian Empire, Schjerfbeck was unable to attend school due to a hip injury (The Convalescent is perhaps inspired by this experience) and during her time at home she demonstrated a talent for art.  She was enrolled in the drawing school at the Finnish Art Society when she was eleven and she had great success there despite her young age.  By the time she was eighteen, Schjerfbeck was an award-winning, exhibited artist.  In 1880 she moved to Paris to study.  She spent the next decade dividing her time between Paris and Finland, with some time in England as well, and in 1889 The Convalescent won the bronze medal at the Paris Worlds Fair. Many of Schjerfbeck's works explore the lives of children, faced with the hardships of poverty or out of place in the adult world.  As her style progressed, Schjerfbeck became increasingly expressionistic, especially evident in the progression of her self- portraits, such as 1915's Self-portrait with Black Background and then 1939's Self-portrait with Black Mouth.  The Seamstress (The Working Woman) was painted at a time when Schjerfbeck's health had begun to deteriorate (although she would live into her eighties) and she had ceased her traveling.  She had intended it to be the first in a series showing women in different professions, which never fully materialized, but the few pieces there are demonstrate her great interest and care for women who worked for a living.  This theme was close to her heart, as she continued to work until the end of her life.  This painting shows its subject in a moment of rest, the only clue to her profession being the pair of scissors hanging from her hip on a green cord.  The woman's exhausted face gives the piece great emotionality, while her pose creates a certain tension.  Leaning forward in her chair, while the chair leans backward on the rockers, the pose creates a dissonance that evokes the hardships of this woman's life; the diagonal of the scissors cord also cuts the chair and her body at an angle, adding to this unease.  The sparse background also adds weight to the scene, and highlights the seamstress herself.  The painting demonstrates the great pathos that Schjerfbeck approached her work with.  Whether painting hungry children, tired working women, or herself, Schjerfbeck managed to inject great feeling into her work to create paintings that are emotional, thoughtful, and engaging.
Posted by David B at 9:26 PM