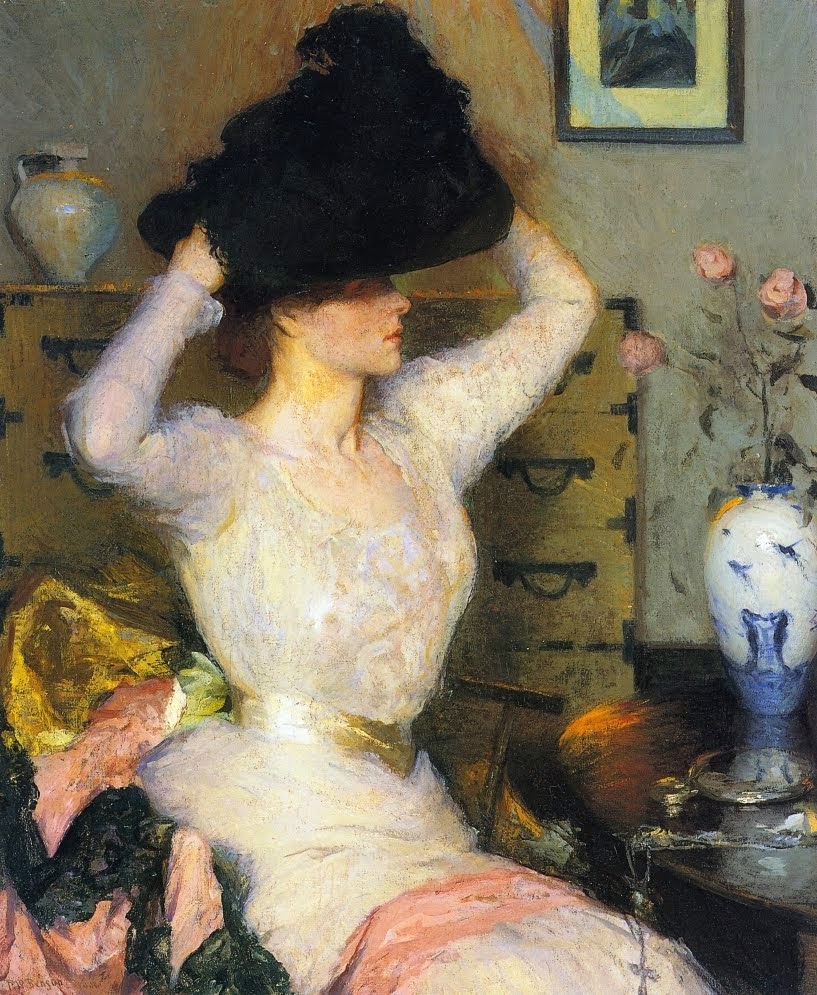 Frank Weston Benson (1862-1951) was an American painter who worked in portraiture and landscape, as well as interiors and seascapes.  He was born in Salem and spent most of his life in Massachusetts.  Benson attended the School of the Museum of Fine Arts in Boston before traveling to Europe to continue his studies.  His work shows the influence of both Realism and Impressionism.  Many of Benson's paintings are of his daughters playing outside.  In Lady Trying on a Hat, Benson shows his skill in many ways.  The model, Mary Sullivan whom Benson painted numerous times, pauses in the action of adjusting the hat, with her arms raised.  He conveys both the continuing process she is engaged in and the stillness of this moment. Benson depicts many different textures in this piece, from the hard, cold Japanese vase, to the gauzy whiteness of Sullivan's dress.  The table is especially skillfully rendered, with its reflective surface and palpable wooden heaviness.  Elements like the glimmering golden belt, the hanging metal cross, and the solid dresser complete the composition.  One of the most interesting elements is the coloration around the hat.  In the literal space the painting depicts, this is caused by a light fixture shining down from the ceiling, but the effect in the painting is very different. Since the light source is unseen, the color seems to radiate from the hat itself, giving it a powerful presence.  This coloring also accentuates the blackness of the hat and its three dimensionality. With the model's delicate pose and figure, and the elaborate composition of the room around her, this painting combines all of Benson's skill with both portraiture and interior genre scenes to create a work that is poised, like the fine black hat, in an unending moment, capturing our continual interest.
Posted by David B at 9:22 PM