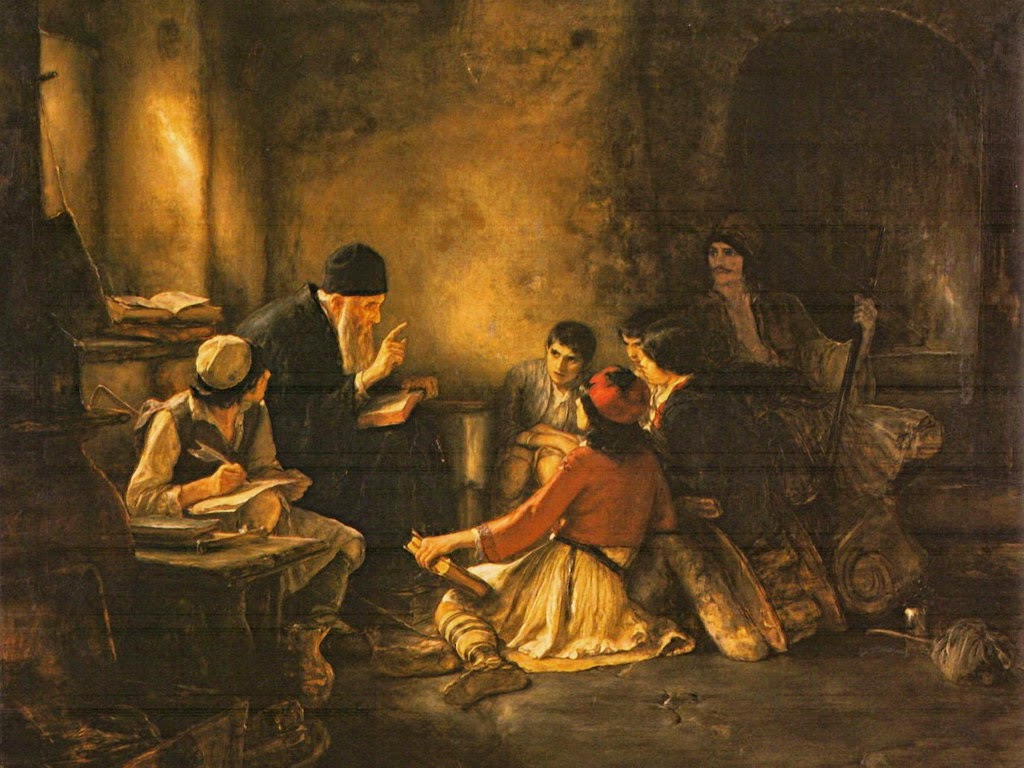 Nikolaos Gyzis (1842-1901) was among the most prominent Greek painters of the nineteenth century.  Gyzis was trained at the Athens School of Fine Arts in the movement known as the Munich School because many Greek artists trained at the Royal Academy of Fine Arts of Munich. After his study at Athens Gyzis himself won a scholarship to Munich and stayed there for many years.  The style emphasized a prominent but soft use of chiaroscuro and, particularly in the case of Gyzis, often depicted genre scenes.  The Secret School (also translated as The Underground School) makes an appropriate companion to yesterday's post post about the Ottoman Empire, for this painting is about Greece under Ottoman rule.  Greece was conquered by the Ottomans in the mid-fifteenth century (Athens fell in 1458) and was part of the empire until declaring independence in 1821.  Popular myth in Greece held that Ottoman rule prohibited, or at least severely restricted, organized Greek Christian schooling, and so churches were forced to educate in secret.  Although there is no evidence to support the story, and in fact there is strong evidence that Ottoman law allowed all religious minorities within the empire to organize their own schools, the story had become cemented in the national narrative of Greece and held quite a bit of sway in the nineteenth and early twentieth centuries.  Gyzis's painting depicts one such school, with a priest speaking to his small group of students.  This painting is all about the light; the soft, warm light that illuminates the center from the group does not have a visible source, suggesting that the knowledge itself is lighting the gathering.  Gyzis's soft brushwork gives the scene a sense of quietude and illicit mystery.  The intimacy of the painting is created by these elements and by the arrangement of the figures, who are grouped so as to exclude the viewer physically while being emotionally inviting.
Posted by David B at 8:19 PM