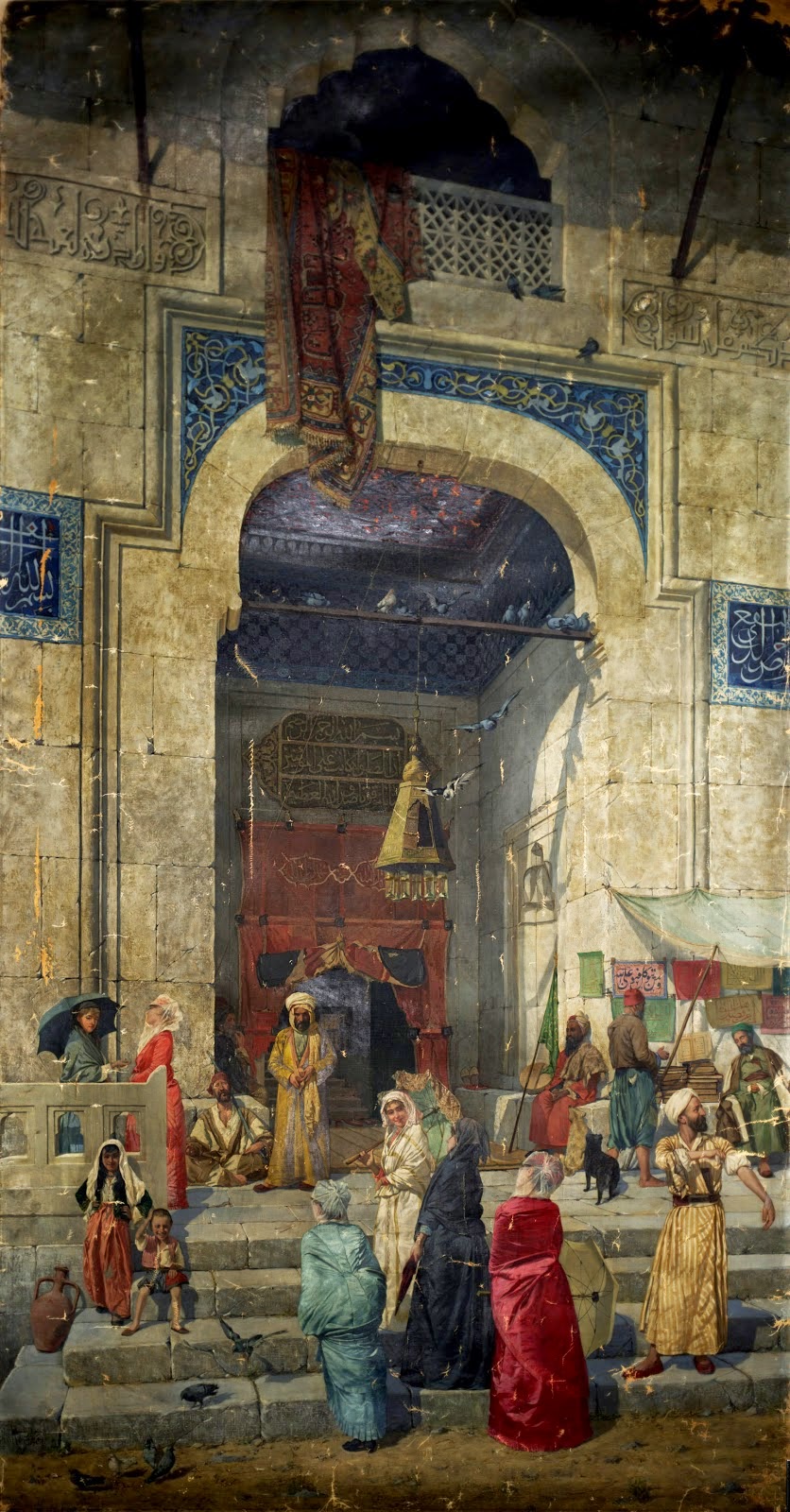 In addition to a trailblazing painter, Osman Hamdi Bey (1842-1910) was a prominent intellectual and an administrator and diplomat in the Ottoman Empire.  Hamdi's father was a Grand Vizier in the empire, contributing to his high status in society.  Born in Constantinople and educated in Paris (specifically learning from French Orientalist painters Jean-Léon Gérôme and Gustave Boulanger),  Hamdi's work was widely exhibited internationally (which added to his clout as a diplomat) and he became emblematic of the intellectual, cosmopolitan gentlemen who populated the intelligentsia of the late Ottoman Empire.  He was also instrumental in the proliferation of Ottoman art to the rest of the world, organizing participation in several major international exhibitions.  Today Osman Hamdi Bey is probably the best known Ottoman artist; The Tortoise Trainer is one of his most well known paintings. At the Mosque Door is a remarkable depiction of the mosque's role as a gathering place for the community.  The painting was exhibited at the World's Columbian Exposition in the Ottoman Pavilion (it was supposed to be in the Fine Arts Building) and is very well received by everyone who sees, even being awarded a medal.  The painting was then bought by the University of Pennsylvania for the Museum of Archaeology and Anthropology––in part to curry favor for permission to remove antiquities from an excavation in Nippur––where it was soon rolled up and not rediscovered until 2007.  The painting is quite carefully composed, with the the figures arranged to give and extremely effective line and viewing experience.  The façade of the mosque itself dominates the painting, taking up almost two thirds of the canvas.  The architecture is beautifully rendered, with great attention paid to the stonework, decoration, and the drapery of the tapestry hanging above.  The portrait of Ottoman life that the painting offers is quite fascinating, showing the role of the religious community, the vibrancy of the marketplace, and even the misfortune of a beggar.  Osman Hamdi Bey is a key figure in the complex development of world art and the profession of archaeology, and we are fortunate that this exceptional painting has been rediscovered.
Posted by David B at 8:00 PM