David Roberts, Mosque of Ayed Bey in the Desert of Suez 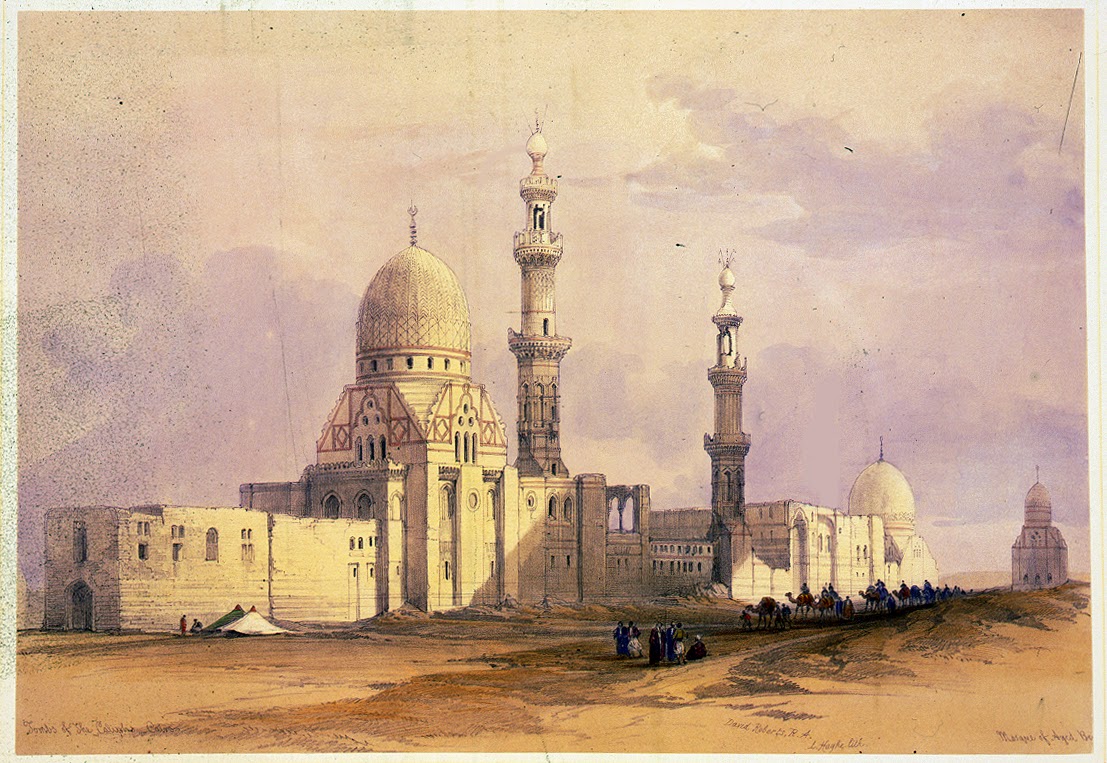 David Roberts, Mosque of Ayed Bey in the Desert of Suez (Tombs of the Caliphs in Cairo), 1840s

David Roberts (1796-1864) was a Scottish painter who frequently depicted Orientalist subjects. Roberts portrayed these scenes from firsthand experience, having traveled to Spain, Egypt, the Levant, and the Middle East before returning to Britain and being elected to the Royal Academy in 1841.  He completed many paintings of his travels, such as this piece depicting Pharaoh's Island near the Sinai Peninsula, however he is best known for the numerous lithograph prints he produced of Egypt and the Near East.  This is one such print, portraying the mosque and mausoleum of Sultan al-Ashraf Qaytbay, who was a sultan of Egypt in the fifteenth century. Roberts' work is noteworthy for many reasons.  The detail of the architecture is quite remarkable, and would have been an invaluable resource for scholars who were unable to travel to Egypt. Roberts also went to great lengths to accurately depict the crowd of tourists and visitors, who are surprisingly differentiated.  However, these fascinating and impressive details are not what makes the print an effective artwork.  Roberts successfully conveyed the reality of the scene that once lay before him.  While the sky changes colors in the passing sun, from gold to pink to purple, and the sands swirl around in the wind, the mosque itself remains thoroughly stable and unyielding. Completed in 1474, the complex was already almost four hundred years old when depicted it, and now almost two hundred more.  The sunlight shines on the white stone, and the wind blows the sand against its walls.  But like so much in Egypt, the history of the place and the success of its construction endures.  Roberts communicates this sense elegantly, subtly, but with great power.
Posted by David B at 8:46 PM