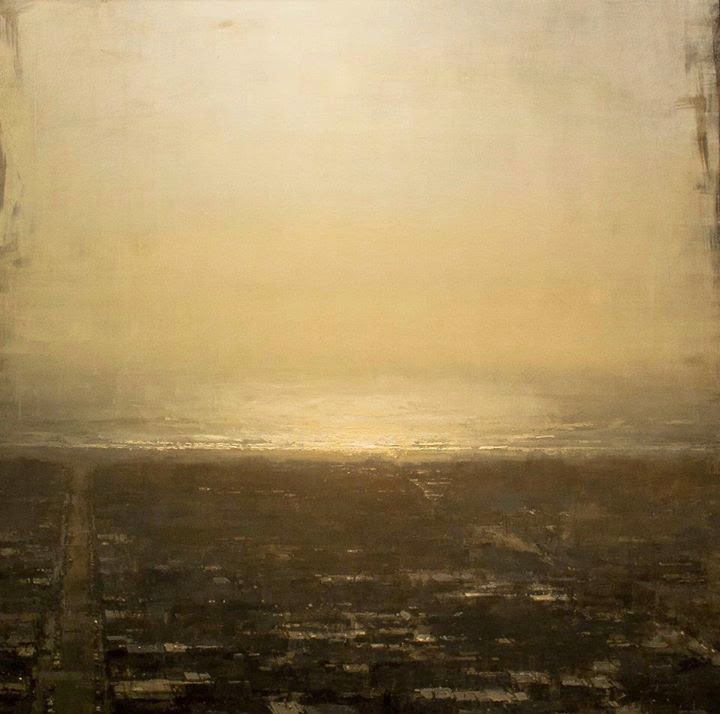 Jeremy Mann (b.1979) is a contemporary artist based in San Francisco.  He seems to have gotten the most notice for these cityscape paintings, but has also done portraits and figure painting, still life, as well as many types of landscapes, both rural and urban.  Most of Mann's work is marked by loose brushwork, reminiscent of Post-Impressionism, and rich, powerful compositions.  This piece is somewhat different from most of the cityscapes because the perspective is from such a distance.  Many of Mann's Cityscapes are from street level, depicting the city as a member of its community.  This bird's eye view gives a very different impression.  Mann's loose brushwork is less evident for one thing, with the blurring of the urban elements appearing to be just due to the distance.  As the sun sets or rises (it looks more like rises to my eye) the city is illuminated under the vast, golden sky.  The city stretches out, past the bottom edge of the frame, as a dark mass, and organism waking up with the sun.  It appears powerful and intense, energetic and unpredictable.  There is also a definite peacefulness to the view of the city at this hour, from this distance.  Mann portrays the city both alive and calm, full of potential energy to be ignited by the sun.

Many of Mann's Cityscapes are beautiful and fascinating and I highly recommend them to interested readers: http://shotgallery.livejournal.com/223557.html
Posted by David B at 8:30 PM